Vancouver, British Columbia--(Newsfile Corp. - September 8, 2020) - Cross River Ventures Corp. (CSE: CRVC) (FSE: C6R) (the "Company" or "Cross River") is pleased to announce that it has entered into a definitive property option agreement (the "Option Agreement") with Ethos Gold Corp. ("Ethos Gold") (TSXV: ECC), dated September 8, 2020, pursuant to which the parties intend to cooperate in the development of the Fuchsite Lake Gold Project (the "Project"), comprising approximately 3,750 hectares located near the town of Armstrong, approximately 300km north of Thunder Bay, Ontario.

The Fuchsite Lake claims represent a new greenfield fault zone gold target that has been overlooked and under-explored despite reasonable access and favourable rock types and alteration that commonly accompany large gold discoveries. In addition, the work programs for Fuchsite will be managed by the Ethos technical team, led by Rob Carpenter and Jo Price, Vice President of exploration for Ethos.

Mr. Carpenter is a professional geoscientist (PGeo) with more than 30-plus years of corporate and technical mineral exploration experience. He has founded and played key roles in several successful junior mining companies including Kaminak Gold Corp. He led the Kaminak team as CEO from inception in 2005 through acquisition, discovery, and maiden resource calculation of the multimillion-ounce Coffee gold project, Yukon. Kaminak was acquired by Goldcorp in 2016 for over $500 million. In 2014, the Association of Mining and Exploration for B.C. (AMEBC) awarded him and his team the Huestis Award for Excellence in Mineral Exploration for the discoveries at Coffee.

Stated Dr. Carpenter: "The Fuchsite Lake claims represent a new greenfield fault zone gold target that has been overlooked and under-explored despite reasonable access and favourable rock types and alteration that commonly accompany large gold discoveries. We look forward to partnering with Cross River and to starting our work on the project in the next several weeks."

Stated John Fraser, President & CEO of Cross River: "We're very pleased to work with Ethos. The track record of their technical team is obviously impressive, and their involvement and endorsement of the project was a critical factor in Cross River's decision to enter the earn-in agreement. We feel this project represents an outstanding opportunity at discovery and we're eager to move forward."

Under the terms of the Option Agreement, the Company has been granted the right to acquire up to a sixty percent interest in the Project from Ethos Gold in consideration for completing a series of cash payments totaling $300,000, issuing a total of 2,000,000 common shares (the "Option Shares"), and incurring expenditures on the Project of at least $2,000,000. The Company is required to make the cash payments, issue the Option Shares and incur the expenditures, in accordance with the following schedule in order to maintain the Option Agreement in good standing:

Following completion of the required cash payments, issuance of the Option Shares and satisfaction of the expenditures, the Company will hold a sixty percent interest in the Project, subject a two percent net smelter returns royalty in favour of Ethos Gold. One-half of the royalty can be acquired for a one-time cash payment of $1,000,000.

All Option Shares issued to Ethos Gold pursuant to the terms of the Option Agreement will be subject to a four-month-and-one-day statutory hold period in accordance with applicable securities laws. In addition, 500,000 common shares of the Company issued to Ethos Gold upon the entering into the Option Agreement will be subject to a pooling arrangement during which time they may not be sold, transferred, pledged or otherwise encumbered. One-half of the shares will be released from the pooling arrangement after six months, with the balance being released six months thereafter.

About the Fuchsite Gold Project

The target is Archean shear zone hosted gold within deformed and altered ultramafic (fuchsite altered) and mafic volcanic rocks. This setting and rock type association is a major indicator of gold mineralization in many world-class gold camps in the superior province of Ontario and Quebec.

The prospective shear zones each extend more than 5 km along trend and were first identified by regional mapping programs in the 1970's by the Ontario government (OGS Report 251). The region, however, has largely been overlooked by exploration companies. The only recorded work for gold comprises five short drill holes (all less than 40 m deep) completed on the Lett occurrence in 1981. Drill logs detail extensive hydrothermal alteration, brecciation, quartz veining and sulphide mineralization, however, no assays are available. The Ontario government sampled this outcropping zone (OGS Report 251) and obtained 1.7 g/t Au and 1.4 g/t Au from two separate samples. No follow up work has been recorded in nearly 30 years.

The presence of anomalous gold in outcrop samples within shears suggest a systematic structural and targeting program on the claim block will help assess the gold potential. Initial work will consist of ground truthing the shear zone model followed by an airborne magnetic survey designed to map out the structural geometry at the property scale. 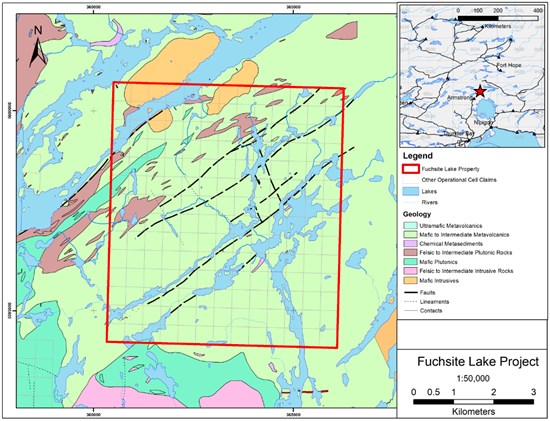 The technical content disclosed in this press release was reviewed and approved by Jo Price, PGeo, MSc, vice-president of exploration of Ethos and a qualified person as defined under National Instrument 43-101.

Cross River is a gold and silver exploration company that is primarily engaged in the acquisition and evaluation of precious metals exploration properties. The Company owns an option to acquire a 100% undivided interest in the Tahsis Property, an early-stage gold exploration property located on Northern Vancouver Island, in the Nanaimo Mining Division, British Columbia. Cross River's common shares trade under the symbol "CRVC" on the CSE.

On behalf of the Board of Directors of

This news release may contain forward-looking statements. These statements are based on current expectations and assumptions that are subject to risks and uncertainties. Actual results could differ materially because of factors discussed in the management discussion and analysis section of our interim and most recent annual financial statement or other reports and filings with the Canadian Securities Exchange and applicable Canadian securities regulations. We do not assume any obligation to update any forward-looking statements, except as required by applicable laws.

To view the source version of this press release, please visit https://www.newsfilecorp.com/release/63354