Vancouver, British Columbia--(Newsfile Corp. - November 1, 2019) - Ethos Gold Corp. (TSXV: ECC) (OTCQB: ETHOF) ("Ethos" or the "Company") and Société d'exploration minière Vior Inc. ("Vior") (TSXV: VIO) are pleased to announce the commencement of their previously announced drill campaign on the Ligneris gold project (the "Ligneris Project"), located 110 km north of Val-d'Or, Quebec (see press release of September 18, 2019). Two diamond drills are now on site and running, each targeting two different areas, namely the Central and the South zones. Approximately 6,000 meters of drilling in the First Phase program is scheduled to be completed by the end of December 2019. 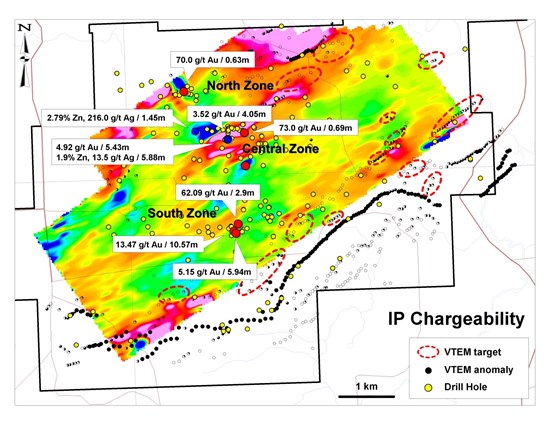 Craig Roberts, P.Eng., President and CEO of Ethos, stated: "We are excited to have commenced a significant drill program at Ligneris to test many of the high priority targets developed by our independent consultant InnovExplo. Previous drilling on Ligneris, almost 30 years ago, tested only the first 300 metres from the surface and intercepted multiple significant gold intervals (see Figure 1). Many of the drill holes will now test the strong chargeability anomalies identified in the recent gradient IP survey below this gold mineralization. We look forward to the results from this program."

Ethos can earn a 51% interest in the Ligneris Project by issuing to Vior 1.0 million Ethos shares and incurring $3.0 million in expenditures over the first four years of the agreement. Following an initial earn-in to 51%, Ethos will have 60 days to elect to earn-in a further 19% interest (thereby increasing its total interest to 70%) by incurring an additional $4 million in expenditures over the subsequent three years.

This press release contains certain "forward-looking statements" within the meaning of Canadian securities legislation, relating to, among other things, the Company's intention to acquire an interest in the Ligneris Project and planned exploration activities at the Ligneris Project. Although the Company believes that such statements are reasonable, it can give no assurance that such expectations will prove to be correct. Forward-looking statements are statements that are not historical facts; they are generally, but not always, identified by the words "expects," "plans," "anticipates," "believes," "intends," "estimates," "projects," "aims," "potential," "goal," "objective," "prospective," and similar expressions, or that events or conditions "will," "would," "may," "can," "could" or "should" occur, or are those statements, which, by their nature, refer to future events. The Company cautions that Forward-looking statements are based on the beliefs, estimates and opinions of the Company's management on the date the statements are made and they involve a number of risks and uncertainties. Consequently, there can be no assurances that such statements will prove to be accurate and actual results and future events could differ materially from those anticipated in such statements. Except to the extent required by applicable securities laws and the policies of the TSX Venture Exchange, the Company undertakes no obligation to update these forward-looking statements if management's beliefs, estimates or opinions, or other factors, should change. Factors that could cause future results to differ materially from those anticipated in these forward-looking statements include, possible, accidents and other risks associated with mineral exploration operations, the risk that the Company will encounter unanticipated geological factors, the possibility that the Company may not be able to secure permitting and other governmental clearances necessary to carry out the Company's exploration plans, the risk that the Company will not be able to raise sufficient funds to carry out its business plans, and the risk of political uncertainties and regulatory or legal changes that might interfere with the Company's business and prospects. The reader is urged to refer to the Company's reports, publicly available through the Canadian Securities Administrators' System for Electronic Document Analysis and Retrieval (SEDAR) at www.sedar.com for a more complete discussion of such risk factors and their potential effects.

To view the source version of this press release, please visit https://www.newsfilecorp.com/release/49334