Following up on initial soil, rock, and stream sediment sampling (see September 25, 2018 press release), five trenches were hand dug at Pine Pass in September and early October 2018. Trenches 18PPT1, 2 and 5 were hand dug across the projected east limb of the host syncline which dips approximately 45-50˚ to the west. Trenches 18PPT3 and 4 were dug across the projected west limb which dips approximately 50-60˚ to the east. Additionally, a line of continuous rock chip sampling (18MST1) was completed across the west limb mineralized horizon on a road cut on the John Hart Highway.

This interval is contained within a broader mineralized envelope: in Trench 1 there were cumulative sample intervals (not continuous: there is one 10m and one 7m gap) of 255 m averaging 0.27% V2O5.

These Trench 2 intervals are also contained within a broader mineralized envelope: in Trench 2 there were cumulative sample intervals (not continuous: there is one offset gap and one 10m gap) of 218 m averaging 0.43% V2O5.

The beds in Trenches 1 and 2 are dipping approximately 45-50˚ to the south-west and the sampled intervals will have to be adjusted to true width. The trenches appear to be oriented approximately parallel to the dip direction (perpendicular to strike). While it is very preliminary true widths of the mineralized beds may be in the range of approximately 70% of the measured lengths.

This sampling is in the western limb of the syncline with near vertically dipping beds so these intervals are believed to be close to true widths. 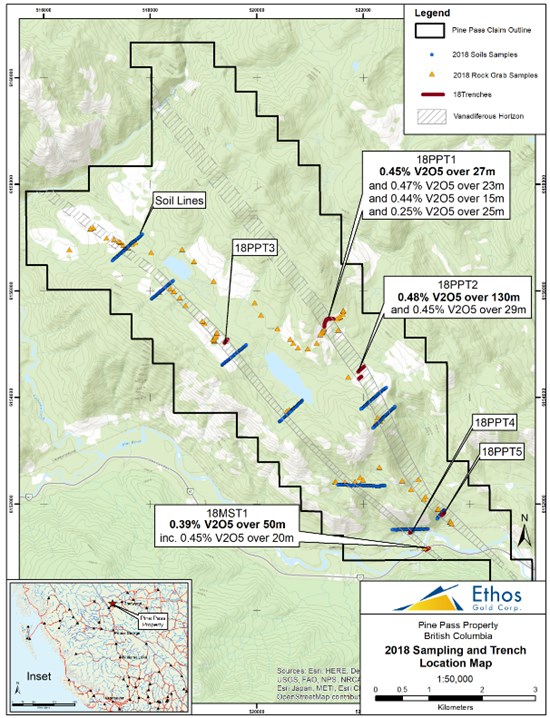 Descriptions and sample summaries of the trenches are below:

Other sampling in this Phase 2 work included:

"We are very pleased and excited with these initial trench and chip sampling results. In Trenches 1 and 2 the grades are comparable with other development stage black shale hosted vanadium projects and the widths are impressive. These trenches are located 1.1 km apart and with the mineralization hosted in dipping bedded stratigraphy the drill target in this area appears relatively well defined with a significant target envelope. The chip sampling on the highway cut is approximately 3.5 km south east of Trench 2 indicating the potential to find mineralization over a substantial strike distance. In total there is approximately 20 km of subcrop strike distance to explore at Pine Pass (approximately 10 km on each syncline limb).

"Moving forward we will proceed with work to submit permit applications for an initial drill program to commence in the spring of 2019, as well as for additional trenching and possibly some small test pits. We are also evaluating commencing an initial metallurgical testwork program on sample material taken from the trenches starting in the next several weeks.

"With current net cash of approximately $Cdn 5.8 million Ethos is well positioned to execute on these next phases of work.

As previously noted the advantageous location of the Pine Pass vanadium project cannot be over stated. Pine Pass is located on a paved highway 70 km from Chetwynd, British Columbia (population 2,600). The property has been partially logged, and there is good access via logging roads from the highway. There are power, natural gas, and railway lines along this corridor. There is significant mining and other resource activity in this region of British Columbia, providing excellent support infrastructure, mining suppliers and skilled workers."

All samples were delivered to ALS Chemex in Kamloops and/or North Vancouver, British Columbia for analysis of select elements by ICP-MS analysis using 4 acid-digestion. Quality control entailed insertion of company standards, blanks, and duplicates into the trench sample stream. In addition, ALS Chemex routinely inserted blanks and standards into the sample stream at the assay laboratory. All reported standard and blank assay values, as well as duplicates were within an acceptable margin of error.

Work at Pine Pass is being supervised by Jo Price, M.Sc., MBA, P.Geo, a consultant to the Company. She is a Qualified Person as defined under National Instrument 43-101 and has read and approved this release.

This press release contains certain "forward-looking statements" within the meaning of Canadian securities legislation, including statements regarding future exploration plans and development potential on the Pine Pass project. Although the Company believes that such statements are reasonable, it can give no assurance that such expectations will prove to be correct. Forward-looking statements are statements that are not historical facts; they are generally, but not always, identified by the words "expects," "plans," "anticipates," "believes," "intends," "estimates," "projects," "aims," "potential," "goal," "objective," "prospective," and similar expressions, or that events or conditions "will," "would," "may," "can," "could" or "should" occur, or are those statements, which, by their nature, refer to future events. The Company cautions that Forward-looking statements are based on the beliefs, estimates and opinions of the Company's management on the date the statements are made and they involve a number of risks and uncertainties. Consequently, there can be no assurances that such statements will prove to be accurate and actual results and future events could differ materially from those anticipated in such statements. Except to the extent required by applicable securities laws and the policies of the TSX Venture Exchange, the Company undertakes no obligation to update these forward-looking statements if management's beliefs, estimates or opinions, or other factors, should change. Factors that could cause future results to differ materially from those anticipated in these forward-looking statements include the risk of accidents and other risks associated with mineral exploration operations, the risk that the Company will encounter unanticipated geological factors, or the possibility that the Company may not be able to secure permitting and other governmental clearances, necessary to carry out the Company's exploration plans, and the risk of political uncertainties and regulatory or legal changes in the jurisdictions where the Company carries on its business that might interfere with the Company's business and prospects. The reader is urged to refer to the Company's reports, publicly available through the Canadian Securities Administrators' System for Electronic Document Analysis and Retrieval (SEDAR) at www.sedar.com for a more complete discussion of such risk factors and their potential effects